The Voice, The King, and I 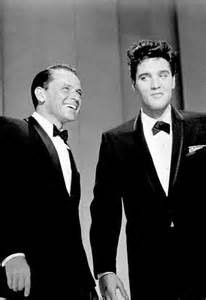 I’m excited for the weekend! Saturday, June 13th, 2015 I’ll be zipping down to the Sandia Resort and Casino in Albuquerque, New Mexico to perform my Las Vegas show, Sinatra Forever, which will be a real gas because I love Albuquerque, they have some great Sinatra fans. The show has been receiving some great comments and reviews – which is something every performer revels in – and I can feel the excitement growing as the 100th birthday celebration for Frank continues.

I’ve also been getting marvelous feedback on my Look Like the King glasses, which is fantastic because I was certain they’d be perfect party props, Halloween getups, and ice breakers. So, thinking about my show and the glasses made me consider the dynamic between those two icons, Ol’ Blue Eyes and The King.

By the time Presley hit the big time, Sinatra was a seasoned superstar, so with both having won the hearts of different generations of youngsters there were bound to be comparisons and with Frank’s vocal dislike of rock ‘n’ roll music, rifts between fans were common. However, both performers voiced a respect for one another, with Sinatra quoted as saying, “Only time will tell. They said I was a freak when I first hit, but I’m still around. Presley has no training at all. When he goes into something serious, a bigger kind of singing, we’ll find out if he is a singer. He has a natural, animalistic talent” and Presley having said, "I admire the man... He is a great success and a fine actor." I invite you to read a wonderful blog on everything Elvis by Alan Hanson, the Elvis History Blog. It thoughtfully and respectfully covers everything about The King and includes some tidbits on The Voice too.

Of course, Frank would host the 1960 Frank Sinatra Timex Show: Welcome Home Elvis after Presley served his time in the army, which also marked appearances by Nancy Sinatra, who would go on to star with Elvis in the 1968 film, Speedway. On the show Frank sang Elvis’ “Love Me Tender” and Elvis sang Franks “Witchcraft” It was a great duet and must to see by all fans.

The pair are legends with seemingly infinite talents that didn’t really infringe upon the other’s turf – it’s almost a shame they didn’t cross paths more often.