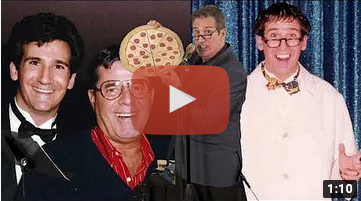 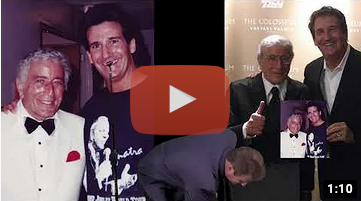 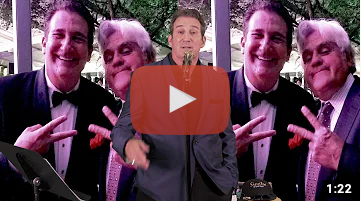 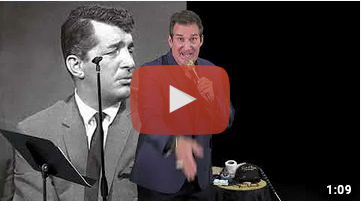 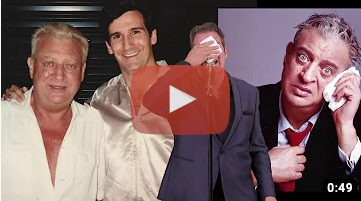 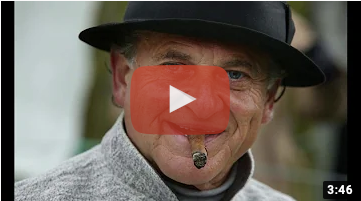 RICK MICHEL *****Imagine a major production with the celebrity talents of Neil Diamond, Bob Hope, Rodney Dangerfield, The Godfather, Howard Stern, Kermit the Frog and Miss Piggy, Dr. Phil, Jerry Lewis and Dean Martin, just to name a few, and an outstanding finale sung by none other than the "Chairman of the Board" himself, Frank Sinatra! Now imagine that just one person performs this major production with 100 additional voices in less than 75 minutes. Impressive? To say the least.

Rick's performance is well choreographed. He incorporates props, music, and a good deal of costume changes in the front of the audience with the helpful assistance of exceptional timing.
Impressive? Must be seen to believe.

Upon meeting Rick Michel, you are handed a very eclectic business card. The front of his card is full color with a "cartoonized" Rick in thought surrounded by the vision of celebrities he impersonates, with the title "Inside the Mind of Rick Michel." On the back of the card, a sharp contrast of simple black and white with a single statement: "Rick Michel Makes an Impression." Coincidentally, Rick Michel is as animated and fun loving, if not more so, as his business card. He greets people with as much charisma as he has on stage.
Impressive? Definitely.

Of his decades of doing impressions, (roughly since he was seven years old), Rick concedes that the last thirty years have been the most exciting. Having been told by Neil Diamond's mother, after a show, that his impression of her son gave her chills; working alongside John Byner, Mickey Rooney, and Sherman Hemsley, as the voices of some the Krofft puppets; working side by side with Rich Little on stage; performing his impression of and for Bob Hope, in front of President Gerald Ford and Frank Sinatra; being asked by Steve Allen to join the original "Tonight Show" cast on stage during the reunion show - as Steve's special guest; entertaining American troops in Korea in a Bob Hope-style road show; opening for comics such as Bobby Collins, John Pinette, Rita Rudner and George Wallace; Playing a schizophrenic killer on Baywatch (a role that was written specifically for him); making appearances on "Entertainment Tonight", "America's Funniest People" and the "Larry King Live" show; serenading Debbie Reynolds with his best "Sinatra"; he has appeared up and down the Las Vegas Strip since 1981, starred as Dean Martin in David Cassidy's "The Rat Pack is Back!" and at one time or another as Frank Sinatra and Joey Bishop.

Currently, Rick is producing his own show called "Drinkin'-Singin'-Swingin' Salute to Frank Sinatra-Sammy Davis Jr.-Dean Martin". He recently was invited to sing with the San Jose Philharmonic Orchestra at the historic National Theater in Costa Rica in his show "Sinatra Forever" where he focuses totally on the music of Frank Sinatra. Rick is also presently starring in a One-Man Show "The Rick Michel Variety Show".
Impressive? Totally.

Does Rick Michel, makes an impression? You better believe it!

Some of what the people Rick Michel has performed for thought ...

"Your impersonation of my son was so good it gave me the chills!" For a comic, impressionist, actor, such praise from a superstar's mother was one of the finest compliments Rick Michel could ever receive. The star was none other than singer/songwriter Neil Diamond.

"I just think Rick is the greatest." -- Mickey Rooney

"The finest impression of Frank Sinatra I have ever heard." - Variety

Rick has appeared in "Playboy Girls of Rock 'n Roll" and "Comedy Cabaret" at the Maxim Hotel, as well as a satire on the Entertainment Capital of the World, "Forbidden Vegas" and "Viva Las Vegas". He performed the voices of the infamous Rat Pack in the Copa Room at the Sands Hotel and Casino, on the very stage where the real stars appeared.

"Rick Michel is one of the best impressionists around today. His material is fresh and he makes me laugh, every time we work together." -- Rich Little

In 1994, Rick had the opportunity to work with Rich Little. Actually, it was better than that; he shared the spotlight with him, playing Bob Hope to Little's Bing Crosby and Jerry Lewis to his Dean Martin.

"After seeing Rick Michel perform, I have become a big fan." -- Steve Allen

Rick performed at the legendary Friars Club in Beverly Hills, where he met Steve Allen. While in the Sahara Hotel audience to see the reunion of the original "Tonight Show" cast, with Bill Dana and Louie Nye, Rick was asked to come up on stage as a surprise guest, and join Steve Allen as part of the show.

Rodney came to see Rick perform in a Production Show at the Sands Hotel and Casino.

"Rick thinks he's the greatest singer in the world...it's almost my opinion too." Jackie Mason

After Rick saw Jackie Mason's show at the Sahara Hotel, he invited Jackie to the Riviera Hotel where Rick was performing.