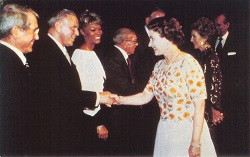 I came across a postcard of Frank Sinatra shaking the hand of Queen Elizabeth II of England and started to wonder who would be America’s royal family? Looking at our pocket change won’t help because it’s the icons who have led our country into greatness staring back, and Britain’s royal family, while are on their coins, have become more ambassadors than political leaders in my mind.

Then I found another photograph of Frank meeting Queen Elizabeth and it happens to be numbered the first of fifteen great moments of people meeting the queen on BBC America’s website. The photo, which appears to have been shot at the opening of the 1958 movie Me and the Colonel starring Danny Kaye, is spectacular. The Chairman of the Board is bowing gracefully with a pleasant, confident smile on his face and Elizabeth, just five years into her reign, is stunning, friendly and, of course, regal.

The postcard meeting took place in 1983 at a Hollywood gala party hosted by the President and Nancy Reagan and shows The Voice flanked by the Perry Como, Dionne Warwick and George Burns while Ed McMahon, the emcee, is in the back.

Frank looks so completely at ease in both situations, which would certainly suit what is known about his demeanor, that I could picture him as our representative, our king, if you will. Now, before any rumors start, I feel I should insert a disclaimer here – Sinatra’s 1966 movie, Assault on a Queen, in which he played the starring role, referred to the ship, Queen Mary.

Canada celebrates Victoria Day this coming Monday, a day that honors the venerable Queen Victoria, and one Internet site says that Queen Elizabeth’s favorite song is Frank Sinatra’s In the Wee Small Hours of the Morning, so I think it only fitting to raise a glass that day to the Queen and King Francis the first!