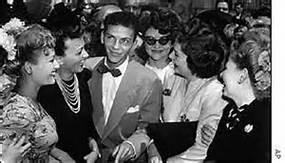 I admire Frank Sinatra for many reasons, but especially for that voice.  His vocal abilities earned him many fans of every age, from bobby soxers to grandmothers, but just how many of his peers admired Ol’ Blue Eyes? It turns out it’s a very long list.

I’ve written about how both Tony Bennett and Paul Anka have referred to Sinatra as their “idol,” but there are even more artists that have stated their admiration for Frank publicly.  Jazz legends Lester Young and Miles Davis have both referenced Sinatra as their source for learning the nuances of a ballad.  Speaking of jazz, the great Oscar Peterson called him the “best” and even did an entire album as a tribute in 1959 called, “A Jazz Portrait of Frank Sinatra.”

And speaking of album tributes, have a look at Bob Dylan’s recent recording, “Shadows in the Night,” which is a cover of songs Sinatra did.  In 2001, Robbie Williams released an acclaimed album called, “Swing When You’re Winning,” as a tribute to his lifelong love of The Voice.  He even included a duet with Nicole Kidman of Somethin’ Stupid, the song Frank did with Nancy.  Carly Simon and Linda Ronstadt have both dedicated albums to Sinatra too.

While Frank’s disdain for rock music was well known, that genre’s musicians couldn’t help but admire him.  Jim Morrison of the Doors once said, “That Sinatra -- no one can touch him.”  U2’s Bono wrote in a New York Times op-ed, “If, like Frank, you sing it like you'll never sing it again. If, like Frank, you sing it like you never have before,” expressing admiration on his dedication to a song.

The thing is, this could be a very long piece if I listed every performer who admired Frank Sinatra because the list never really ends as brand new artists become drawn to his abilities.  I’m glad I started my admiration at a young age and get to live it every day.