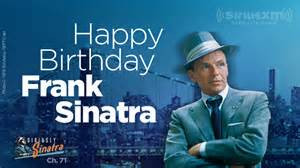 My celebration of “Ol’ Blue Eyes’” 100th birthday, Frank … A Musical Journey, has been complete and ready to go for some time and now it’s fun to see some of the others that are honoring this important occasion.

“The Voice” was proud of his Italian heritage. Both of his parents immigrated to the United States from Italy and Frank would have learned about and witnessed the difficulties they faced as such. As a prize-fighting boxer, Anthony Sinatra had to go by the name Marty O’Brien to be allowed to fight in the Irish-only gyms of Hoboken. Frank’s parents would even open a bar and grill called Marty O’Brien’s, so there’s no doubt young Frank had to learn about racial tension first hand, something that likely shaped his own feelings about prejudices.

With Dean Martin, Sinatra would perform a light number called “Glad that We’re Italian,” meant to poke fun at themselves while asserting their roots. Early in his career Frank recorded the Italian ballad “Ciribiribin” with the Harry James Orchestra and I’ve always enjoyed his very impressive version of “Torna a Surriento,” which is sung entirely in Italian and highlights Sinatra’s voice in a way English songs seem incapable of doing.

Let’s return to the centennial celebrations. The tenth annual Los Angeles-Italia Film Fashion and Art Festival, a pre-Oscar event showcasing the ties between Hollywood and Italy in show business, will be commemorating Frank’s birthday with a host of celebrities paying tribute to him in addition to special showings of his films during the festival.

Also of note, the festival will be honoring late-night host Jimmy Kimmel with their Excellence Award. Learning that started me thinking about the fun that would have ensued with Frank as a guest on Jimmy’s show. Remember, Sinatra hosted the Tonight Show, so it would have been quite a match, but I just can’t imagine that there would have been any Mean Tweets to read!