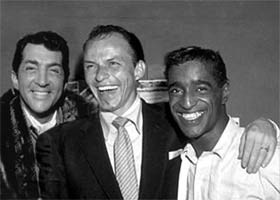 Performing my Las Vegas show, Sinatra Forever is a blast, but it’s after the curtain drops on a showing of Drinkin’ – Singin’ – Swingin’ that I realize how much the camaraderie experienced with my co-stars really adds a whole new, otherwise unobtainable dimension to a performance. It was following this revelation that it occurred to me that it would have been much the same dynamic Frank, Dean, and Sammy would have experienced.

I’ve been fortunate enough to find a talented group of entertainers to share the stage with who each possess the largely unteachable ability to channel the emotions needed to create a real connection that is not only felt by the audience, but also by each of us performers. To make an authentic Rat Pack show, that chemistry is vital. Just think of the bonds that were made by Sinatra, Martin, and Davis, Jr.

Sammy and Frank first met in 1941 in Detroit, “it was just me and Frank, the entertainer and the voice. We bonded that day at the Michigan Theatre, talking shop,” Davis Jr. said in “Sammy Davis, Jr.: A Personal Journey with My Father.” Tracey Davis would go on to explain how her father considered Frank his best friend and how he told her, “After the Michigan Theatre, Uncle Frank became a lifelong soul mate and best man at my wedding to your mother.”

Dean Martin was also an “uncle” to Tracey. “Uncle Frank my have been the voice, Pop, but he was also the agitator! You were the go-to-hell guy! Uncle Dean was the make-it-work gentle kind of soul. He seemed to soften everybody up like a Downy sheet in a dryer,” she retold in her book. When you’re going to give a tribute to three guys on stage that are basically family to each other, you better be able to bring the goods or the audience will spot the insincerity a mile away.

I hope you’ll catch our show the next time you have the opportunity!