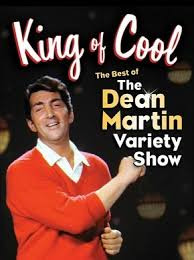 Did anyone watch the new Harry Connick, Jr. NBC television show, “Harry” this week?  Connick, Jr. is a wonderful musician and if anyone was thinking about putting together a Rat Pack today, it would be difficult not to include him.  He projects an innate ease on camera and possesses the requisite amount of “cool” to be a part of the club.  It doesn’t hurt that he knows a bit about Frank and Dean too.

Reading about the inspiration behind his brand new daytime talk show, which premiered on September 12th, definitely caught my attention; Harry cited Dean Martin and his variety program as the model they’re basing his show on.  The Dean Martin Show, which was also on NBC, was a hit for ten years before transitioning into his celebrity roasts, which was, of course, another hit.  It’s no wonder Connick, Jr. would want to strive for a piece of that.

Connick, Jr. broke into the spotlight with the success of the soundtrack to the movie, When Harry Met Sally and never looked back.  Tony Bennett, when seeing him perform at the Algonquin Hotel in New York around that time even said, “Connick could be the next Frank Sinatra.”  Harry has stated that Sinatra was a huge influence and that meeting him was, “the most intimidating experience of my life.”

Explaining the reason he chose Martin as an influence Connick, Jr. says, “Some of the best performers in the world are thoroughly rehearsed. But I'm exactly the opposite,” referring to the excitement added to Dean’s show knowing that even Martin didn’t know what was going to happen next at times.  The thing that’s been pointed out is that Martin was talented enough to pull off that type of scenario, so the success of Harry’s show will depend upon his own off the cuff abilities.

I’m rooting for him; anyone with enough sense to recognize and respect the abilities of Dean and Frank, and want to be a little like them, can’t be too bad.