What Present Would You Give Frank? 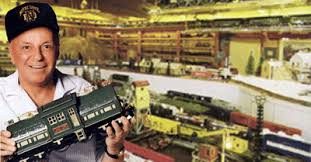 Birthdays were important to “The Voice”. His daughter Tina said, “He loved his birthdays. Birthdays, they signify life. He was very, very Italian, happy to share and to bestow celebrating people and himself.” If you wanted Frank to recognize your birthday wishes, a simple card wouldn’t likely do the trick. Luckily, there does seem to be a passion of his that would fit the bill – toy trains.

The Chairman of the Board apparently discovered an interest in trains at an early age when he’d admire the toy train displays in store windows, which resulted in his mother selling a fur coat to be able to purchase one for him. From there he took on the motto, “He who dies with the most toys wins,” and built a display that rivalled the showroom of the famed Lionel Trains company.

The good news is that many pieces of his collection came his way as gifts, including a life-size caboose that was custom made by his staff and would become a fixture on his grounds. When someone is as passionate about a hobby as Frank was with his toy trains, finding a special gift is no problem.

Sinatra wasn’t alone with his hobby. There’s a long list of celebrity toy train collectors: Rod Stewart, Neil Young, Jackie Gleason, Tommy Dorsey, and Dudley Moore among them. I guess that’s not surprising given the cost and needed space involved with this pursuit.

The rest of January features a host of shows for me, beginning with Sinatra Forever at the Tamarac Palace Theater on the 9th and then again on the 10th at Kings Point, Delray Beach – two fantastic Florida events. 2016 is shaping up to be another very good year!