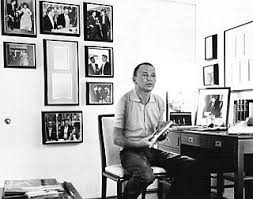 When we’re moved by someone special, we want a way to be remember that feeling and be a part of who was responsible; that seems to be the reason why we want something connected to the stars we love, a piece of memorabilia to give the impression they’re intimately present in our lives.  I like to obtain photos with the celebrities I meet; a glance at a past connection instantly allows me to travel back to that time and place.  There are lots of Frank Sinatra collectables available to his many fans out there, but they aren’t usually cheap.  Here’s a glimpse at some of them.

One look at his first driver’s license will inevitably invoke covetous feelings.  It’s very personal - height, 5’8”; weight, 130 lbs; eyes, blue - can there be a better memento of Ol’ Blue Eyes?!  His name on the New Jersey document was even misspelled “Sintra.”  Is there any wonder this realized more than 15 thousand dollars at auction?

There was even a Louis Vuitton steamer trunk on eBay a few years ago that was priced at $31,000 - it had the initials F.S. on one side and was “alleged to have once belonged to Frank Sinatra.”

If you look around there’s everything from art, plaques, shoehorns, and lighters, to powder jars, stuffed bears, and baseball-style cards out there if you’re interested.  I hope you have deep pockets though, this stuff isn’t inexpensive!  Do you have any Sinatra collectables?