Tony Bennett and The Voice 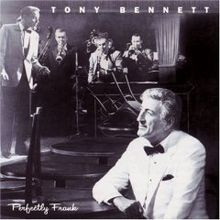 It’s marvelous to see a crooner in both the news and the charts. The timeless Tony Bennett made history when his recently released album, “Cheek to Cheek,” hit number one making him, at 88, the oldest living artist with a number one record on the US Billboard weekly top 200 chart. This album was recorded with Lady Gaga, another New York City artist who was able to prove herself able to hold her own with a top vocalist.

It would seem Bennett made a career based on talent combined with hard work and, for the most part, clean living. That latter part automatically excludes you from the Rat Pack sort that made his genre so popular. In fact, when talking about Frank Sinatra, Bennett has stated, “He was always very friendly and a few times invited me to his birthday party, which was a great experience. But I was never part of the Rat Pack and that whole thing.”

Bennett seems modest when discussing “The Voice” because in the ‘60s Sinatra told Life magazine, "For my money, Tony Bennett is the best singer in the business." When asked if he was nervous meeting Sinatra for the fist time he responded, “Yeah. I respected him so much.” He also said about Frank, “He was 10 years older than I was and he was my idol, and when he announced that I was his favourite singer, it made all of his fans come and check me out. I've been sold out ever since.”

When asked about the best advice anyone ever gave him, Bennett said, “I went to see Sinatra backstage once as I had been given a summer replacement special on TV and I was very nervous about…. Sinatra told me not to worry about being nervous, that it was a good thing since it showed that I cared… and if I cared the audience would also care and root for me. He was absolutely right and to this day I still get butterflies when I go on stage, but I know that it's a good thing.”

Bennett’s 1992 album, “Perfectly Frank” is, as I mentioned in last week’s blog post, a tribute to Frank. So, given all of this it’s not surprising that in 2001 Bennett founded the Frank Sinatra School of the Arts, a performing arts high school in New York City.

It’s fantastic to see so many witnessing the importance of the pop standards in the arts and I’m betting that we’ll see Mr. Bennett break his own record once again.