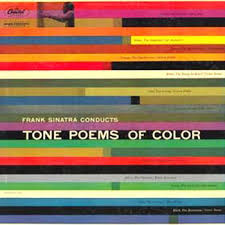 Chances are you’ve never heard of a symphonic poem; while it was once in vogue to create a piece of orchestral music to invoke the feelings behind a poem, book, painting or some other artistic work, the genre fell out of favor as Romanticism died and the tone poem was, essentially, forgotten.  Ol’ Blue Eyes embraced this genre for an album in 1956 called Frank Sinatra Conducts: Tone Poems of Color.

The Voice seemed to have a very real interest in conducting as Tone Poems of Color wasn’t his first kick at the can; ten years earlier in 1946 he released an album called Frank Sinatra Conducts the Music of Alec Wilder, who is also the composer for two of the dozen pieces on Tone Poems of Color.

As you may surmise, each tone poem is based on a particular color, beginning with a track for “white,” and finishing with “red.”  Each piece is about the length of a typical song, and an intense representation of the composer’s emotions pertaining to their chosen hue, in addition to being inspired by the poetry of Norman Sickel.

It should come as no surprise, given that this albums comes towards the end of Frank’s turbulent marriage to Ava Gardner, that it’s been suggested that Tone Poems of Color was an artistic way for the emotional Sinatra to release some of those reflective and affective feelings.  Listening to the record, it’s difficult to deny this possibility.

This was a wild time for Frank, he was at the top of his game with his music and films, yet his personal life was shaky, to put it mildly.  Because this isn’t a vocal recording, Tone Poems of Color tends to be swept under the rug a bit, but it’s an important part of Frank’s body of work.  Clear your schedule for an hour, sit back with a glass of Jack and have a listen - don’t read the back of the CD, see if you can guess the “color" as each piece plays.  Lose yourself in the music.