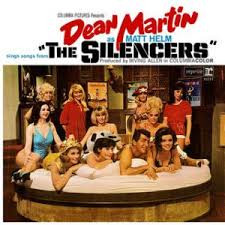 The year was 1962 and there must have been an early hint of spring fever in the air because Dean Martin recorded the album, French Style fifty-five years ago this month.  At that time, Martin was a popular and busy man, with his films and music much in demand, and the recordings of the year highlighted his international appeal as he brought some of that European cool to meet his own patented American bravado.

French Style featured 12 songs, all unmistakably French or, more precisely, Parisian themed.  Paris, the origination of haute couture and destination of choice for the rich and famous, was the ideal place to pedal romantic films and song, it is after all the city of love, but Dean took this one step further by bringing romance back home.

The songs are beautiful samples, fully stated, but not over-the-top as so many do with such covers.  Gigi is truly a gem and I found it interesting that one could easily mistake Martin for Bing Crosby when listening to La Vie en Rose.

Cha Cha de Amor was another 1962 album.  These songs utilized an authentic Afro-Cuban rhythm section and it was after recording them that Martin left Capitol Records for Frank Sinatra’s Reprise label.

Dean embraced the Latin standards for Dino Latino, which was released in October of ’62.  For side one he grouped five uptempo numbers before slowing it down for the ballads on side two.  South of the Border would later be on the soundtrack to the 1966 film The Silencers in which he starred - the film’s tagline read, “Girls, Gags, and Gadgets.”

Yes, 1962 was a decidedly international year for Dean Martin and his fans.  All you have to do is decide where you want to visit and trust me, you can’t make a wrong turn!