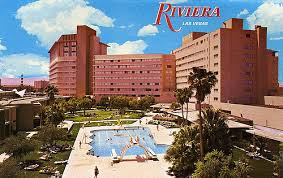 Frank Sinatra had his suite there, but, while Las Vegas was his city, he was known more as the Sands guy, and his pal Dean Martin became the entertainer for The Riv.  The King of Cool set up shop there permanently in 1968 and was given a ten percent stake in its ownership, but left the venue in 1972 after stunning the entertainment world because he wanted to cut his performances back from two per night to an unprecedented one.  Management refused and eventually bought back the shares and Martin took his services to the new MGM Grand Hotel.

Ol’ Blue Eyes has continued to make news at The Riviera after his death though; first some television ghost hunters set up for a night in his old suite, claiming to document paranormal activity in the room, then when the furnishings in the hotel were recently sold via a yard sale type offering, his suite was picked clean.

I guess it’s all a somewhat melancholy reminder that everything is static in this world - the show must go on, even if it’s a different set of performers on the stage.

But, I’m set to hit the stage Saturday, June 18th in Hammond, Indiana at the Pavilion at Wolf Lake with Sinatra Forever and a 24-piece orchestra and the weather forecast is beautiful, so if you’re in the area, stop by for what will undoubtedly be a great show!