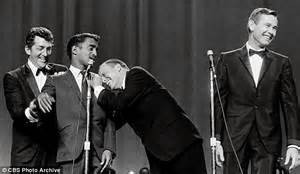 It was fifty years ago this past June that one of the best concerts in history took place and it was in St. Louis, Missouri. The event featured the Rat Pack at its most powerful, but it wasn’t just their presence that made the show so special, but everything that surrounded that 1965 summer’s eve, which happened to be Father’s Day and Tina Sinatra’s birthday too.

Amazingly, the recording of this concert, not discovered until 1996, is the only known footage of the Rat Pack in concert live. With everything, including some things that shouldn’t be recorded, being filmed these days, it’s difficult to imagine such a time, but a video of the Rat Pack in its prime is a must-watch.

Mix in the reason for this performance: a benefit for Dismas House, a half-way facility for ex-cons which was started in 1959 by Father Charles Dismas Clark, who was a Jesuit priest, and Morris Shenker, a prominent lawyer. Shenker believed prisons did “one thing very well, they make criminals better criminals,” and upon meeting Father Clark, realized they both shared the same belief and recognized the need for something better.

Serve this recipe for success in a storied location, the Kiel Opera House – now known as the Peabody Opera House – and you’ve got the perfect dish. With the Rat Pack presenting as the “meat,” supported by a very young Johnny Carson, who was replacing an injured Joey Bishop, as the emcee, plus Count Basie’s Orchestra under the direction of Quincy Jones as the potatoes, and it all makes a sumptuous meal that was actually broadcast in select venues across the country.

The performance itself shines through the grainy, unrehearsed quality of the film to reveal the perfection that earned Sinatra the nickname, The Voice, in addition to showing off the on-stage chemistry that existed between these friends that had essentially become family as the years passed. It’s magic to watch.

Grab an apple juice and find this video because it’s a true piece of American history.