The Piano Man Behind The Voice 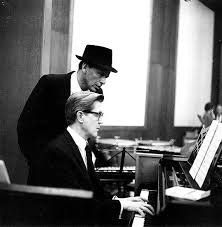 When you’ve been doing this as long as I have, you don’t need anyone to explain that a great accompanist can make a good singer sound exceptional.  For Frank Sinatra, when it came to the piano, the man for the job was Bill Miller.  Do you know the name?  Here’s a little about the guy Ol’ Blue Eyes would call, “my partner at the piano.”

Born in Brooklyn in 1915, Miller was ten months Sinatra’s elder.   He was mostly a self-taught piano player who started with Frank in 1951 after The Voice liked what he heard as Miller performed at the Desert Inn in Las Vegas.  Miller was right there helping Frank get out of his slump after the bobby soxer days.

Miller was a genuine piano player.  I remember an excerpt from Salinger’s “The Catcher in the Rye” when Holden is talking about Ernie the piano player, “He was putting all these dumb, show-offy ripples in the high notes, and a lot of other very tricky stuff that gives Me a pain in the ass.”  Holden would have liked Bill Miller.  He played songs straight.  When speaking about him, Frank once said, “Bill's talent is quiet but always there.”  Like Holden Caulfield, Frank hated phonies.

Miller had a very tragic moment in his life; in 1964 a mudslide in California destroyed his home.  Bill and his 16-year-old daughter survived, but it was Frank that broke the news to him at the hospital that his wife had drowned.  Frank bought him a new house and, except for a five - year period after 1979 when the pair had a falling out, Bill was on retainer.

The song Miller was mostly known for was, “One for My Baby” (and One More for the Road), for which he composed a signature introduction; Miller played the song at Frank’s funeral in 1998.

It’s thinking about people like Miller that were so integral, yet largely unrecognized, for Frank’s success that makes me grateful for all the wonderful musicians that have accompanied me on stage.  I thank and salute all of you.