The Perils of Celebrity 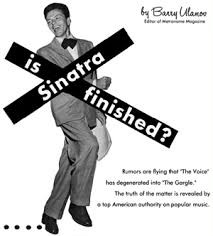 When you’re famous, there inevitably will be people that want to profit from your celebrity; I’m sure it didn’t take Frank Sinatra very long to learn this.  In fact, by 1947 he was already having to defend himself against the sometimes-negative workings of the media who, let’s face it, want a juicy story to sell to their readers.  It was 70 years ago this month that Ol’ Blue Eyes made headlines for a rather brash altercation with journalist Lee Mortimer.

First, let’s face it, there’s not likely anyone around today that can accurately tell us the truth about what happened leading up to the glorified results printed in papers across the country - Sinatra had socked the newspaper guy and was arrested for it.

Frank’s version of the story was that Mortimer called him a racist name which triggered Sinatra’s already famous temper.  “The Voice” didn’t feel he had a choice but to punch him.  Mortimer seemed to claim he was happily minding his own business when Sinatra hit him from behind, completely unprovoked.

Mortimer had been attempting to link Frank to organized crime, which undoubtedly landed the writer on the singer’s bad side.  Sinatra was feeling pressure from other sources too, some saying “The Voice” was now “The Gargle” thanks to the toll cigarettes and drinking had taken.  One headline read, “Is Sinatra Finished?”

Today we can look at those kinds of thoughts and laugh, but gossip sells papers and a polarizing figure like Sinatra would have his fans hoping it wasn’t true and his haters drooling for the opportunity to laugh at his misfortune.  Things really haven’t changed much with the way stories are marketed, have they?

Anyway, it appears the result of the arrest was that Frank plead not guilty, then settled out of court for $9,000, which is the equivalent of almost $100,000 today.  Mortimer died of a heart attack in 1963 without having reached 60 years.