The Highs and Lows of April 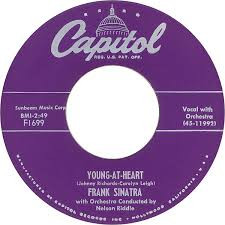 Looking back at Ol’ Blue Eyes’ career, new Sinatra fans may have a difficult time believing that there were some terrible lows that went along with all the extraordinary highs that we now recall when his name is mentioned.  April, which has always been a favorite month of mine, showers bring May flowers, but in Frank’s case, he would experience both incredible highs and numbing lows during this month.

Around 1950 he probably thought that his career was almost over.  Thanks to a divorce, his reputation was at an all-time low, he injured his throat, causing shows to be cancelled, and performances he was able to make drew minuscule numbers.  And he was broke.  A Columbia Records executive claimed he “couldn’t give away” Sinatra’s records.  It wasn’t surprising that his relationship with Columbia came to an end.

The Voice’s position couldn’t sink any lower, but, as the cliché goes, you can’t keep a good man down and by the end of the following month of April he would be exclaiming, “I’m back, baby, I’m back!”

After filming From Here to Eternity in Hawaii for two weeks, Frank made his first recording with “the greatest arranger in the world,” Nelson Riddle and after listening to the result, he ecstatically knew he was on his way back to the top.  That first song was, I’ve Got the World on a String, and if that’s not an example of foreshadowing, I don’t know what is.

The fruits of all that hard work included hit record after hit record and an Academy Award for Best Supporting Actor for his performance in From Here to Eternity.  The rest, as we know, is history and perhaps the song that best sums up this period for Frank would be the lyrics from that playful yet insightful tune, High Hopes - just have a listen and remember that ant!