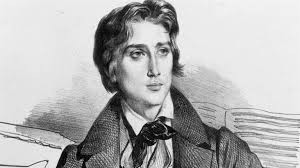 It seems every generation witnesses it, screaming fans jumping up and down in a frenzy at the mere sight of their favorite singer, grabbing at them and offering them love notes or other objects of affection, some even fainting after being overcome with the overwhelming joy of the moment. Each decade or so there’s that one individual that rises above the rest in popularity to become the very definition of the word “idol.” What makes teens do this?

I’ve written about Frank Sinatra being the first pop idol, but it turns out that wasn’t exactly accurate. I wasn’t aware of any other musician being as absolutely adored by a whole generation before Ol’ Blue Eyes. The King, the Beatles, Michael Jackson, Justin Bieber, and all others came after him, but before there were Bielebers or even Bobby Soxers there were girls suffering from Lisztomania.

Look it up; I’m not kidding. The rather handsome Hungarian composer and pianist, Franz Liszt did an extensive tour of Europe around 1840 driving fans into hysteria, something that wasn’t known to happen to musicians during this period, which led to the coining of the term, Lisztomania.

As children mature and begin to look beyond their parents for role models, musicians, actors, sport figures or other pop celebrities often become the target. Not everyone may understand it, but according to Dr. Alan Ravitz, “it's actually part of the work necessary for healthy development.” Of course, anything can get out of hand and “healthy” can change to “unhealthy” should depression or criminal activity become involved, such as what happened when a rival Bing Crosby fan stabbed a Sinatra fan with an ice pick in 1945!

Sinatra may not have exactly been the first musical pop idol, but he’s the best – and still the first to have photographs and moving pictures!