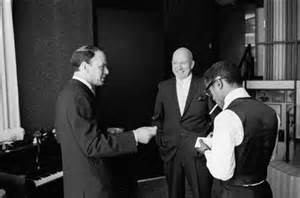 Frank Sinatra was revered for his swinging lifestyle – parties, jet setting, booze and women – but amazing at it may sound, it seems he modeled his swingin’ ways on his very close friend, composer Jimmy Van Heusen. (pictured here on Sammy Davis Jr.'s wedding day)

Born Edward Chester Babcock (remember Bob Hope’s character’s name in “The Road to Hong Kong?”), he chose the name James Van Heusen at the age of 16 as his on-air moniker. The Van Heusen part came from the famous shirt makers. His closest friends called him “Chet” throughout his life.

Frank would fall into the “close friend” category so much that Van Heusen would be buried in the Sinatra family plot. Jimmy wrote more songs that were recorded by “The Voice” than any other composer and the songs on that list are staggering: “My Kind of Town,” “All the Way,” “High Hopes,” “Call Me Irresponsible,” and the standard “Come Fly with Me” just to name a few. For some unknown reason, his name seems to be often overlooked when the top contributors to the Great American Songbook are mentioned.

He would be nominated for the Academy Award for Best Song 14 times with four wins; earn an Emmy Award for “Love and Marriage;” in addition to Grammy Award, Tony Award and Golden Globe Award nominations.

Impressive right? Sure, but let’s get back to the important stuff: swingin’. Frank once said “he’d be Jimmy Van Heusen if only he could pass the physical.” Shirley MacLaine commented that, “he was kind of a man’s man and yet extremely romantic” and Angie Dickinson said, “He was charming and fun and funny. He’s the first man that I ever knew well that stuck the telephone in the oven at night.” He was a World War II test pilot and remained a swingin’ bachelor until he got married at age 56 and remained happily married until he died at 77. His epitaph fittingly reads, “Swinging on a Star.”