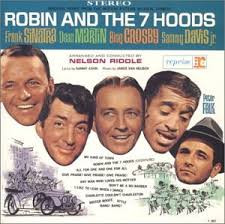 For Sammy Davis, Jr. the fans’ favorite turned out to be 1959’s Porgy and Bess. This movie adaptation of the 1935 opera is a tailor made film for Sammy, Mr. Show Business. This consummate song and dance man handled a difficult subject matter with a professionalism befitting his co-stars, Sidney Poitier and Dorothy Dandridge and has now been rewarded with the recognition of his fans.

The overwhelming choice for Dean Martin’s top film also came from 1959, Rio Bravo. This was a star-studded cast with none other than John Wayne starring along side Martin with Ricky Nelson and another Rat Packer, Angie Dickinson and it is consistently listed at the top of any best western list. Martin’s role required resilience and showcased his talent beyond singing.

With Ol’ Blue Eyes’ repertoire of films, the choice may not be obvious, but the dark and deep 1962 movie The Manchurian Candidate received top honors. The cast was outstanding in their ability to pull off a movie full of surprises, sometimes uncomfortable, and it’s no wonder it is rated among the top films of all-time.

The Rat Pack is often remembered for their cool and playful ways on stage and in film, which is why it was extremely pleasing to see the people choose such outstanding movies for each of these members. There’s a whole lot more to these guys than a drink and a cigarette.