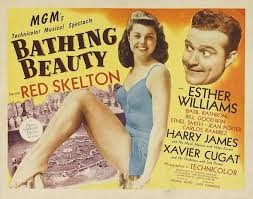 I caught the 1944 film, “Bathing Beauty” on TCM last week - that Red Skelton is such a funny guy - and while Red was on stage singing a duet with the Esther Williams, he sang, “You heard that Sinatra fellow,” to which Williams replied, “I swoon when he gets mellow,” and I realized there are quite a few tunes out there that reference “Ol’ Blue Eyes” in the lyrics.  Can you think of any off the top of your head?

Perhaps the first time I really paid attention to Bon Jovi’s hit single, “It’s My Life,” was when they performed it for the closing ceremonies at the 2002 Olympic Winter Games in Salt Lake City, completely bringing the house down.  It’s a powerfully uplifting anthem and he references his fellow New Jersey-born singer when he says, “My heart is like an open highway / Like Frankie said / I did it 'My Way’” giving a very pertinent homage to Sinatra.

The British group, The Dream Academy, had a top ten hit in the mid ‘80s with their song, “Life in a Northern Town.”  In the opening verse of this truly dream-like tune they sing, “And through an open window came / Like Sinatra in a younger day.”  Later in the song they reference JFK and the Beatles.

Speaking of the Beatles, George Harrison’s 1974 single, “Far East Man,” actually opens with a spoken dedication to Frank, likely in response to The Voice saying that Harrison’s song “Something” was the greatest love song of the past 50 years.

Rapper Jay-Z made it onto the list of top songs about New York with his 2009 single, “Empire State of Mind” and he chose his words wisely with the line, “I'm the new Sinatra / And since I made it here / I can make it anywhere,” although I think he may have been referencing popularity more than singing ability.

There are more.  Lots more.  But I think you get my point: Sinatra has been relevant longer than any other pop icon in American history and it’s no less true today than it was more than 70 years ago when Red Skelton and Esther Williams mentioned him in a movie.