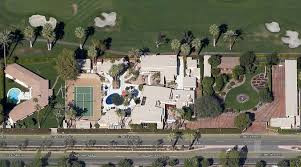 Frank loved Palm Springs; he made his fortress there to protect him from the stresses of the outside world. For nearly 50 years Ol’ Blue Eyes made his home in that desert oasis resort city that is still beckoning people with its promises of the good life.  More than 300 days of sunshine per year is a difficult selling feature to ignore.

Palm Springs, California is and has been home to countless celebrities, but the most famous has to be Frank Sinatra, who referred to his home there as “My Heaven,” and now that nice slice of Heaven, and The Voice himself, is the subject of a new documentary called, “Sinatra in Palm Springs - The Place He Called Home.”

In fact, it was shortly after Frank won an Oscar for “The House I Live In,” that he scouted out the Palm Springs area for a place to get away from cameras and watchful eyes of Hollywood and built his first house there, which he christened “Twin Palms.”

That home must have witnessed a lot.  One story claims Sinatra would hang the Jack Daniels flag to let the movie-star neighbors know it was time to visit for cocktails.  The house was also the front line for many of the famous Ava Gardner battles during the pair’s rocky marriage.

After his divorce from Gardner, he moved, but not far.  Now his home was “The Compound” and it remained his home nearly to the end.

The première for this new movie took place February 20th, 2018 to a sold out audience - with ticket prices ranging from $25 to $125 each - but there is a second showing planned February 25th (don’t plan on getting tickets to this one either, if you click the link for tickets, it’s sold out too!).  I guess I’ll be watching for the film to come to a theater near me and then I’ll be first in line.