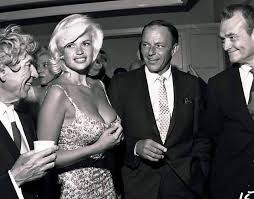 Frank Sinatra’s life was a series of ups and downs, with thankfully more elevations than depressions, often resulting in extremely varied stories coming from those who interacted with him.  His generosity and loyalty are legendary, but so was his temper and, sometimes, cruelty.  Those that knew him best seemed most inclined to talk about the former, even after undoubtedly experiencing or witnessing negatives.  This dichotomy is represented in the many media depictions that make him seem to be a saint in some stories, yet tales of pretty evil behavior exist too.  It was the latter that viewers of the FX television series Feud recently saw.

The show’s initial season deals with the famous rivalry between Joan Crawford and Bette Davis and the episode titled, More, or Less tackles the 1962 movie that starred them both, What Ever Happened to Baby Jane?  The director, Robert Aldrich, at one point is shown having to deal with a very unhappy Frank Sinatra in the film 4 for Texas, a 1963 western comedy that also starred Rat Pack pal, Dean Martin.  Ol’ Blue Eyes is the very epitome of meanness, even saying, “I ought to have you decapitated and buried in the f****** desert” to Aldrich at one point.

Of course, Sinatra is said to have suffered with bipolar disorder, a very misunderstood illness even now, that explains much of this behavior and, naturally, the polar-opposite stories we hear too.  But what does this tell us about The Chairman of the Board?  One, that even two years past his 100th birthday, he’s still relevant; and two, that since most highlight the positive contributions that Sinatra made - and, let’s face it, they are so huge they can’t be ignored by even his biggest detractors - those are what’s most important.

Would it have been nice if Frank was all sunshine and rainbows?  Maybe.  But he may not have accomplished as much without that fiery passion; he made the most with the cards he was dealt and the world is a better place overall for most of us because he did.