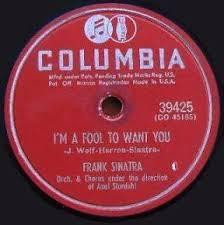 The mid-20th century folk music revival essentially marked the birth of the term, singer-songwriter as Pete Seeger, Woody Guthrie and so many others began their version of telling a story through music that would redefine the industry in many ways.  This would eventually bleed over into other genres, including the pop music we know today, but things are different than they were during Frank’s heyday – the focus seems more on the lyrics – the message – than the delivery.  There are still beautiful voices like Celine Dion, but you’ll notice she sticks to what she does best: singing.

Up to the late ‘50s, it was rare for a singer to have a song writing credit, even though Sinatra was known to make changes to songs to make them appeal to the audience he knew so well.  Still, there is a handful that Ol’ Blue Eyes did put his name on: I’m a Fool to Want You; Sheila; Mr. Success; Peachtree Song; Mistletoe and Holly; Take My Love; and This Love of Mine.

My favorite of these is I’m a Fool to Want You and it’s no surprise that this song seemed to have affected Frank deeply, even with stories of him leaving the studio in tears during its writing.  Sinatra was an emotional person and he was a master at projecting that emotion through his voice.  When he sang, you felt the song’s meaning and you can hear the truth in the lyrics when you play this song.

Frank knew love and perhaps that’s why I’ve had my own connection with his music.  Love gets me out of bed each morning and when you’ve found it, truly appreciate every day.