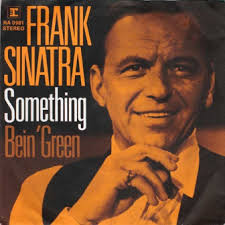 Sinatra was not afraid to make his thoughts on rock music known - he didn’t like it.  I’m not sure if Ol’ Blue Eyes was a fan of the Beatles though; when they came along it was Frank’s songs that were being overtaken in the number one slot, so it stands to reason he may not have been too pleased with that.  Still, there was at least one Beatles song Sinatra was very fond of: “Something.”

Penned by George Harrison, “Something” is a song from the Beatles’ 1969 album, Abbey Road.  It’s an iconic album, yet John Lennon said “Something” was the best song on the LP and Paul McCartney considers it the best song Harrison’s ever written.  They’re not alone; “Something” is the second most covered Beatles song of all time - “Yesterday” is number one, which Frank also covered - having been recorded by more than 150 artists.

And how much did Sinatra like the song?  He called it, “the greatest love song of the past 50 years.”  That’s certainly high praise from the guy that probably knew love songs better than anyone else.  Frank even made a small lyric change, adding the name “Jack” to one of the lines and Harrison incorporated this change during some live performances. https://www.youtube.com/watch?v=FoDyoW5IAwk

Still, when on stage, Sinatra would sometimes refer to the song as his favorite Lennon/McCartney composition, and some people think this is because he just wasn’t that familiar with the current songs and their facts, but perhaps it was a jab at the Beatles duo - giving Harrison his props as the best songwriter in the group.

No matter what, Frank was a fan of “Something” and there’s no denying it’s a pretty sweet tune

I myself have a full Symphony chart on it arranged by Don Costa and looking forward to doing my own spin on it someday with www.FrankAMusicalJourney.com .