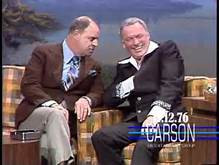 When you talk a lot about Frank Sinatra, you usually end up mentioning one particularly funny man who made a career at being a pain in the side for everyone - Don Rickles.  You’d hear stories, see them on The Tonight Show, they performed together, and they were friends.  For two people, both with rather cantankerous public personas, they got along together marvelously.

Don started out studying to be a dramatic actor, but began doing standup because of the lack of acting work.  It was early in his career, while he was performing on stage, that The Voice attended one of his shows where Rickles delivered one of his now-famous insults.  “Make yourself at home, Frank.  Hit somebody.”  That was something you didn’t do to Frank, but Ol’ Blue Eyes enjoyed it so much he helped him get a start.

I did meet Rickles once when he was performing in Mississippi and he was genuinely interested in what I did.  I was at his show, but had to pop out early to attend my friend Sonny Turner’s  performance nearby, and was told later that Don spoke about me and invited me on stage.  Talk about a missed opportunity!

Sinatra and Rickles were true friends.  Once, when they were both performing in Vegas, Frank had the police pick up Don in the middle of his show, without Rickles knowing why, and escort him to Frank’s hotel because Sinatra wanted to spend the night drinking with him.  Don was a pallbearer at Frank’s funeral.  When asked about him not long ago, Rickles said, “He was the most charming, terrific man in the world.  He really was.  He was fun to be with.”

What was great about Don was that despite all the nastiness in his words (just try reading some of his jokes without his delivery), you could see he was not like that himself.  With Don, it seemed to be one of those rare occasions when the worse you were treated, the more he liked you.  Rickles died this year at the age of 90, but like Frank, it seems as though he’ll always be with us.