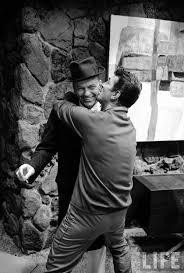 With friends like Dean Martin, Sammy Davis, Jr., Joey Bishop, and Don Rickles, just to name a few, there are going to be jokes.  Local musicians would tell stories of pie filling all over their instruments from Sinatra-initiated pie fights with Rickles – The Voice would make amends about the mess with autographs after the gig.

How about the time Frank pulled one at a party, planting a “prop” bottle with the other booze bottles, then paying a bodyguard to get into a shouting match with him, and then smash Ol’ Blue Eyes over the head with the phoney container?  Sinatra stayed on the floor a good three minutes with everyone thinking he’s been killed before jumping up, laughing.  Later the same evening he set off a firecracker in the piano player’s tuxedo pocket – but he did send the guy money for a new tux after the show.

Barbara Sinatra talked about his love of planning elaborate practical jokes.  She also told how laughter was a way to diffuse that famous temper; when a tense situation arose over a game of charades with friends, culminating with Frank throwing a clock across the room after time was called before his team could guess the correct answer, one of the guests said they now knew the answer to the song they were supposed to figure out: As Time Goes By.  This cracked Sinatra up, putting an end to the seriousness of the situation.

Yes, everything seemed to go straight to Frank’s heart, but he proved time and time again that laughter is truly the best medicine.  That and a voice that will never be matched.