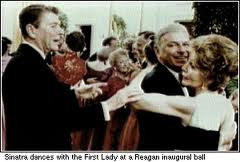 Anyone tired of the election talk yet? With the election jostling already approaching full swing, it seems appropriate to talk about Frank Sinatra’s political ties, of which there are many because with the type of popular power Ol’ Blue Eyes wielded, it was definitely beneficial for a presidential candidate to get him on their side.

Sinatra went all out for JFK, even producing his inaugural gala, after being introduced to him through fellow Rat Packer and brother-in-law to John Kennedy, Peter Lawford, unquestioningly helping to get him elected, but this wasn’t the first indication that The Chairman of the Board followed the political scene. When first and only son, Frank Sinatra, Jr. was born in 1944, he was named after the serving president at the time, Franklin D. Roosevelt.

While it’s safe to refer to Sinatra as a Democrat, he does have Republican ties. In 1985 he produced Ronald Reagan’s inaugural gala and creating such a prestigious production as a presidential inauguration once, let alone twice, is no small honor or feat. Of course, when you’re as good as Sinatra, you produce a third gala, as he did for Reagan’s second inauguration.

Sinatra wasn’t done being a part of the Presidential Galas, because when George H.W. Bush was elected in 1989 he appeared for an unprecedented fourth time to sing “You’ll Never Walk Alone,” after introducing himself as “Barbara’s husband.”

Politics were a large part of Frank’s life and he played a large part in the politics of our nation. Who would Frank be backing this year? Clinton? Sanders? Biden? Trump? Let me know.