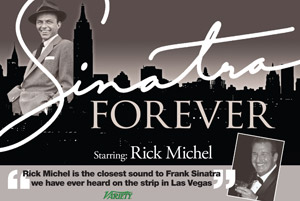 Sinatra Forever: A Tribute to Frank Sinatra is a concert that pays homage to the greatest singer of all time. This is not an impersonation show but an interpretation performed by Rick Michel.

Rick Michel is one of Las Vegas’ premier singers, a man of whom the show business bible Variety said:

“He is the closest thing to Frank Sinatra we have ever heard.”

Sinatra Forever is a timeless concert and part of the American Songbook with all the original arrangements and musicians that backed up Frank Sinatra.