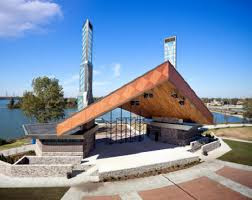 It was nearly a year ago that I brought my Las Vegas show, Drinkin’ – Singin’ – Swingin’ to the Wolf Lake Pavilion in Hammond, Indiana with a 12 – Piece Big Band and June 18th I’ll be back, but with an additional twelve strings to present Sinatra Forever.  The people at The Pav are great, which inspires me to make this performance something truly special.

The shores of Wolf Lake are an exhilarating place to be; the lake has been described, “as one of North America’s pre-eminent natural areas,” with the authorities doing a great job restoring the area to its previous splendor, and it’s chock full of history.  Abraham Lincoln used to visit and his wife, Mary Todd Lincoln was said to have nearly drowned here.

The venue itself is simply a pleasure; the prairie style structure with its two towers was inspired by an 1895 Frank Lloyd Wright concept for the area and was assembled with both the performer and the viewer in mind, making for a gratifying experience for everyone.

This year I’ve prepared something special to premiere at this show: a brand new 24-piece arrangement of the song, “Young at Heart” as a tribute to my Mom who used the song as a theme for an incredible surprise birthday party she threw for me when I turned 30.  There will be a lot of emotion surrounding this moment.

Sinatra Forever is the perfect show for this stage; Frank and the metropolitan Chicago area had a long history, even claiming to have performed there more than anywhere else, and he sang about it often with the iconic signature tune, “My Kind of Town,” and with “Chicago” too.  When Ol’ Blue Eyes married Barbara, they held the reception in the city’s Italian Village.

If you’re in the area, I hope you’ll swing by the Wolf Lake Pavilion June 18th – I promise you’ll have a good time!