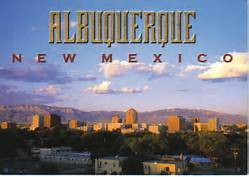 I’m heading to Albuquerque, New Mexico and I couldn’t be happier.  December 9th will see Sinatra Forever at the Route 66 Casino to sing some Sinatra staples and a few Christmas songs too.  Albuquerque is a pretty cool place, so I know the big band sound will be right at home.

Of course, any time I get to travel the Main Street of America, aka Route 66, I jump at the opportunity, but performing right on this historic roadway gives me chills.  Route 66 Casino and Hotel is in the right place to celebrate the highway that is now legendary in popular culture.  They say, at Route 66 Casino, “the entertainment rocks and the scene is unmistakably cool,” and that’s perfect for my Ol’ Blue Eyes inspired Las Vegas show.

I found out Sinatra only played in Albuquerque once; the Civic Auditorium, which opened on April 27, 1957, was known for its unique style of architecture - they poured concrete over a hill of dirt, which was then removed - and it was the host venue for his June 1st, 1957 show.  Unfortunately, the auditorium was demolished in 1987.

Many of you likely know that Albuquerque is known as the Duke City, but do you know why? In the early 1700s, King Philip of Spain granted Spanish colonists permission to start a new city on the banks of the Rio Grande.  When the governor wrote the Duke of Albuquerque in Spain about the new colony and its name, Duke City was born and held, despite the dropping of the first R in the modern spelling.

Albuquerque is a city full of lore, so it’s fitting that Sinatra Forever, a show honoring a legendary icon, plays there.  If you can, come out and see me in the aptly-named Legends Theater at the Route 66 Casino December 9th - it will be a blast.