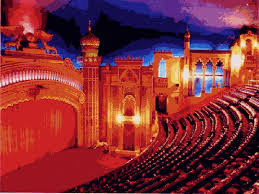 The theatre is a grand atmosphere, designed to give the impression of attending an outdoor concert at night, and is only one of seven remaining atmospheric cinemas in this style in the world. It’s also the largest theatre in New Zealand. The Civic had a celebrated opening in 1929 as a “talkie” cinema and underwent an extensive restoration project in the ‘90s returning it to its former glory and it currently plays host to everything from touring Broadway musicals to rock stars. And now, via a little place known as Las Vegas, Rick Michel.

I’m honored to have a 24-piece orchestra, featuring New Zealand’s best big band, the Auckland Jazz Orchestra and will have the privilege of being joined on stage by a true jazz sensation (he’s only 21!) in Liam Burrows. The show is being fittingly billed as “Sinatra: The Centenary Celebration” due to the proximity to Frank’s 100th birthday.

Speaking of that date, my anticipation for the big day to arrive grows with each passing turn of the calendar and I’m fully enjoying the admiration and respect Sinatra is receiving from all over the world. This year has been a wonderful homage to a man truly deserving. The message has been clear: Frank is a beloved icon. He wasn’t one to project ambiguity either, which makes it really special to recall the words he told me, “You were marvelous Rick, simply marvelous.”