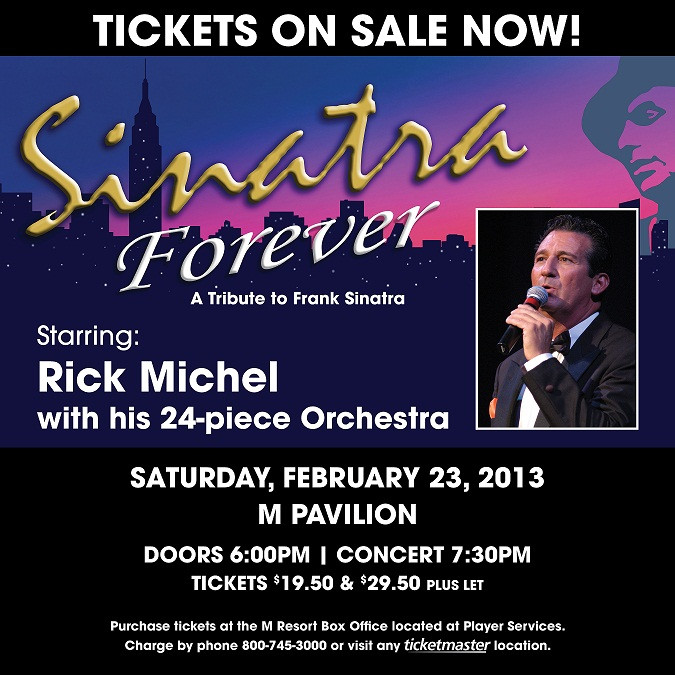 As we mentioned last week, Rick Michel is about to headline his own show. For the first time in his thirty-five years of show biz! He’s performed in shows all around the world, and worked for a variety of producers. “This is the first time it’s all about me,” Michel said in a recent interview. “It’s all about my show. I produced it. Am I nervous? No. Excited? Yes!”

Michel’s show, “Sinatra Forever,” showcases songs by Ol’ Blue Eyes himself, as well as hits from other eras. Michel admits that he’ll surprise crowds with a few Dean Martin tunes, and he’ll really surprise folks with a jaw-dropping second half that you won’t want to miss!

As a production, Michel anticipates a great experience. “I have a lot riding on this show,” he said. “I’m in the headlining position in a high profile Las Vegas casino (The M Resort).” He laughed and shrugged his shoulders. “I gotta start somewhere!” Michel was ecstatic to see the billboard with his name front and center, and can’t wait for his loved ones to see the production. “I’m really excited to share ‘Sinatra Forever’ with friends and family. My mom will be there, too!” he added with enthusiasm. “It’s a big deal to share this show with people who knew me before I started making a name for myself.”

However, Michel’s expectations are, well, none. He plans to just see where the production goes. “There has been a lot of buzz from others that this might be my big moment,” he admitted. For the most part, the folks around Las Vegas recognize Michel for his uncanny impression of Dean Martin. For years, he’s been working for other people as Dean. “But not many people know me as Frank Sinatra. I’m capturing Sinatra’s sound and essence,” Michel said with confidence and a smile. “And I’m pretty darn good at it! I want Vegas to know how good I am.”