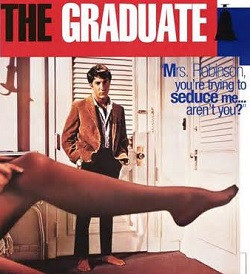 Pair your favorite artist with your favorite song and you may come up with the perfect match – song covers are a huge part of music and most singers will give their own spin to another recording at some point in their career. Sometimes the result is magical, better than the original, but once in a while the endeavor can turn out to be a bit strange or even a complete disaster. “The Voice” was not immune to this.

It’s pretty safe to assume that everyone remembers the 1967 movie, “The Graduate,” written by the phenomenal Buck Henry and featuring a young Dustin Hoffman being seduced by Academy Award winning actress Anne Bancroft and the Simon & Garfunkel song that was birthed from their union, “Mrs. Robinson.” Frank Sinatra grabbed onto this success for his 1968 album, “My Way” and the result was a cringe-worthy rendition that was almost uncomfortable to listen to.

Some of the lyrics were even changed from the original: “Jesus” in the line, “Jesus loves you more than you will know” was swapped with “Jilly” in reference to Frank’s pal, Jilly Rizzo. Additionally, “Where have you gone, Joe DiMaggio, our nation turns its lonely eyes to you” became, “And you’ll get yours, Mrs. Robinson, foolin’ with that young stuff like you do.”

Apparently, the first change was made because some radio stations weren’t playing the original because of the reference to Jesus, so it would seem like a logical fix to gain those stations with Sinatra’s cover by changing the name – even if it doesn’t make a whole lot of sense when the song was sung. I’d love to know the story behind the second adjustment. DiMaggio and Sinatra were good friends at one point, until two very beautiful women played with their insecurities: Ava Gardner was said to have flirted with DiMaggio at times and Marilyn Monroe essentially became a Rat Pack member, especially after the pair’s marriage ended.

It’s amazing how one song, that may not have been the best candidate for a Sinatra pop cover in the first place, can have so going on in reference to an icon like Frank, who likely wasn’t even a passing thought when Paul Simon was writing the lyrics.