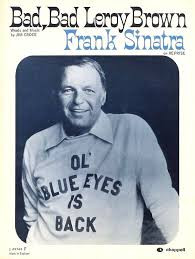 As I mentioned when I wrote about Frank Sinatra’s version of the hit song, “Mrs. Robinson”, a cover can be incredible because of the potential of bringing together a favorite song with a beloved artist. It can be fun to hear some songs performed by The Voice that weren’t at all meant for a big band arrangement – some results are magical, others can leave you asking, “Why did they think that was a good idea?” Then there are some that you don’t think have a chance at sounding good, only to prove your misconceptions premature. Jim Croce’s “Bad, Bad Leroy Brown” falls into the latter category.

Sinatra closed his 1974 album, Some Nice Things I’ve Missed with the iconic song, which had just been released by Croce a year earlier. The original quickly climbed to number one on the charts and was still listed when Croce died in a plane crash September 20th, 1973.

The song’s inspiration was a guy Croce met a while earlier, who got tired of his new job after a week and went AWOL, only to come back later for his paycheck. Croce said this guy “was not made to climb the tree of knowledge,” but was such a character he knew he was going to write a song about him one day.

It’s cool to note that Dean Martin covered the song at a 1977 concert at the Westchester Premier Theater in Tarrytown, NY. Both versions are a lot of fun and worth a listen and since everyone knows the lyrics to the original, you’ll notice the changes each artist made right away.

Since it is Frank’s 100th birthday anniversary year, what do you think would be some good candidates from today’s music that Sinatra may have covered? Have fun with this, name a song and let me know if you think the performance would have turned out well or horrible.