Sinatra 56 Years Ago on the French Riviera 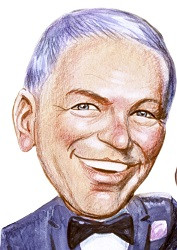 Last week’s blog post reviewing Frank Sinatra’s official CD, ’57 in Concert started me thinking about other live compositions and the number of bootleg albums that are swimming around on shelves and cyberspace, just begging to be listened to, so I’m going to let you know about one that was recorded almost 56 years ago to the date – The Sporting Club: Monte Carlo, Monaco, June 14, 1958.

Monaco, a tax haven and playground for the rich and famous, enjoys its warm, sunny location on the French Riviera and fell directly onto the Hollywood front page with the marriage that made Grace Kelly, Princess Grace of Monaco. Kelly starred with Sinatra in 1956’s High Society and briefly dated him and arranged this concert for the United Nations Refugee Fund.

I love the introduction given for Frank by the English writer, composer, director, actor and singer, Noel Coward – its content is brief, but he bequeaths it elegantly in both French and English, stating he has “never yet known him to strike a false note,” and “when he sings, he sings from his heart.” As beautiful as that is, I prefer how melodic it sounds in French, “quand il chante, il vous offre la tendresse de son cœur,” but it might not sound as pretty with my vernacular.

The concert marked the first time The Voice worked with legendary arranger Quincy Jones and features songs such as Come Fly with Me, The Lady is a Tramp, Bewitched, Bothered and Bewildered, Where or When and closes with a special unrehearsed encore song requested by Princess Grace herself, You Make Me Feel so Young. Given the location, April in Paris was an obvious choice to include too. There are fourteen tracks on the CD, including the introduction.

The CD isn’t particularly easy to find, but it’s a lot of fun to listen to, especially every June 14th because it’s so very pleasant to close my eyes and picture myself engulfed by the music of the Chairman of the Board and the warmth of the Mediterranean.