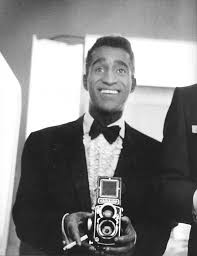 Did you know Sammy Davis, Jr. was an accomplished photographer?  These Rat Pack guys were super-talented; I’ve written about Frank’s painting, and while you guys may know that I’m not necessarily the best photographer myself, I can admire those with the execution to deliver shots worth noticing.  Always a visionary, Sammy even took selfies before selfies were a thing.

A good photographer is often watching from the periphery, noticing the stuff everyone else isn’t seeing, and Sammy, whose favorite joke was, “Talk about handicap - I am a one-eyed, black Jew!” which emphasized that feeling of not belonging that so many artists need, had a great eye.  People were comfortable around him, letting him do what he was able to do very well, blend in with any situation and become unnoticed - and that’s exactly what great photographers need to be able to accomplish.

Sammy had an unequivocally unique opportunity to capture sides of America unimaginable for many.  He had access to the superstar rich and the repressed poor and he recognized what mattered, often embracing a gentler side of each of these subjects.  Because of his race, he had to deal with things his other celebrity friends didn’t, and the affects of this can be seen in his photographs.

He was drawn to cameras from an early age, although his early intentions may not have been to create thoughtful pieces of art, telling a fellow performer in his younger days, “I got a Polaroid so I can take pictures of chicks’ boobs.”

Still, he did create art.  Sammy had intimate access to my idols and icons; I never find it old revisiting these images or all images of the pack and those of that era.  If you wish to see more, it’s worth checking out the following book, Photo by Sammy Davis, Jr. by Burt Boyar.