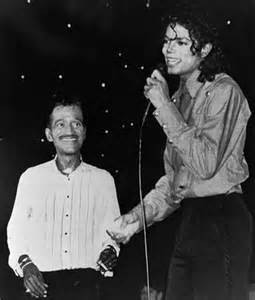 You know how you go on Google searching for something, but you end up finding something else? That happened to me while I was looking up last week’s blog post and one video, Sammy singing Mr. Bojangles, reminded me about the relationship between two incredible artists: Sammy Davis, Jr. and Michael Jackson.nd Mr. Bojangles

“Michael Jackson is more than a friend, he’s like a son,” is what Sammy said when he was 62 before he performed a little bit of Jackson’s song, Bad.  Davis, Jr. would succumb to cancer just two years later and, of course, Michael only lived to see 50.

Two years after the show mentioned above, just three months before Sammy’s death, ABC aired Sammy Davis, Jr.’s 60th Anniversary Celebration to mark his diamond anniversary in show business - an unheard - of achievement when you’re just 64 - and the King of Pop was there with a multitude of other superstars to pay tribute to Davis, Jr.  Jackson sang a heart-felt rendition of As Time Goes By.  After the performance, you can see a genuinely moved Sammy mouth the words, “Thank you Michael.”

Jackson had an unquenchable thirst to be the best and one of his methods to reach that goal was to study “the greats” and Davis, Jr. fell squarely into that category, so young Michael would drop by Sammy’s home unannounced to view the archives of the Candy Man’s performances.  Jackson was a smart fellow when it came to his training.

It’s worth noting that the ABC tribute to Sammy would win the Emmy for Outstanding Variety, Music or Comedy Special.  I miss the days of such programs on television.

Now, back to the video Google inadvertently brought me to, Mr. Bojangles; it’s difficult to believe that song was only written in 1970 since it’s already such an iconic piece of Americana.  Everyone knows the words and the melancholy feeling the song evokes takes over you immediately.  It’s a fine tune to act as a tribute to either man.