Sammy and The Hollywood Palace 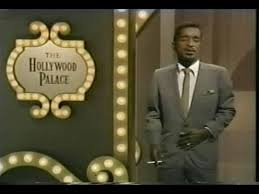 I truly miss the television variety shows that would glue people to their sets for an hour to watch the top names in the entertainment industry sing and dance right into the viewers’ living rooms.  Entertainers seemed more rounded then, able to work without rigid scripting because they exuded an innate talent that allowed them to rise to the top.  The Hollywood Palace was a program that could wow you every week while exposing many to genres they may not have necessarily watched.

For those that don’t recall, The Hollywood Palace, originally named The Saturday Night Hollywood Palace (I’ll leave you to guess which night it aired), replaced The Jerry Lewis Show after only three months and would feature a different host each week and a variety of acts.  Dean Martin hosted during the show’s first season and quipped that he’d like to thank Jerry for “building me this theatre,” in reference to the demise of his former partner’s program.

Looking back, the shows Sammy Davis, Jr. hosted strike me as significant, for it seem that perhaps at this point Sammy seems tired of the racial differences and that it comes out with his songs and the guests.  Just maybe he was using the show as a bit of a platform to express this, but in a positive way.  Watch the segments with James Brown and, that same show, Nipsey Russell.  The performances are amazing and anything but fluff.

As this run in Sammy’s Showroom, Harrah’s Reno winds down, Sammy’s efforts and struggles seem to be even more appreciated, which makes me happy to be doing what I do.  Come down and see us before we close!