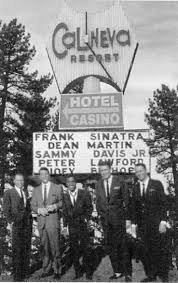 In 1960 Ol’ Blue Eyes and his pal, Dean Martin, bought the Cal Neva Lodge and Casino, the very place where Frank overdosed on sleeping pills in 1951, and promptly built the Celebrity Room and a helipad to make it a truly elite resort for those wanting to spend a little dough.  The Celebrity Room acted as both a venue for all the major stars and, with its decor, as a museum to the nearby Washoe Native Americans.  Marilyn Monroe spent her final weekend here in 1962.

Plus, it was just after one of Sammy Davis, Jr.’s incredible performances at Harrah’s Reno that one of the highlights for Rat Pack fans occurred - Sammy flew out following a March 1988 run to join Frank and Dean to kick off the “Together Again Tour.”  This multi-city, cross country extravaganza was designed to give America one last chance to see this famous trio perform together live and they didn’t disappoint fans or critics, even though Martin had to end his involvement early for health reasons.

Needless to say, I’m very happy to do my part to continue a little bit of Rat Pack history in Reno with the Sammy’s Showroom 50th Anniversary Show.  The atmosphere is already electric and the show’s just begun.  I hope you’re making plans to visit!