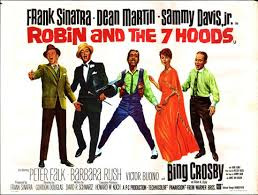 The tale of Robin Hood is a true classic, a highly skilled, flamboyant underdog robbing from the rich to give to the poor - the ultimate symbol of a savior from corruption and injustice - but, let’s face it, prancing around an English forest in tights wouldn’t exactly compliment Rat Pack cool, so the story was changed a little to better suit the actors and attract the maximum number of fans.  Robin and the 7 Hoods is a fun, light film meant to give Rat Pack fans what they want: Frank, Dean, and Sammy entertaining them for a spell.

Set in the shadowy Chicago underworld, a place with Frank as the mob boss Robbo, and Dean as Little John, pool sharking with the best of them, while Sammy, aka Will, clearly enjoying shooting up a saloon while singing and dancing in the old-Hollywood worthy Bang! Bang! scene, making certain movie goers looking for fun were not disappointed.

While the film itself wasn’t meant to win Academy Awards, it contained some gem material and offered up what would become a standard of a song: My Kind of Town, which was nominated for an Academy Award, but lost to Mary Poppins.

Bing Crosby was there too; I love the scene where Frank and Dean croon their instructions for looking cool to the old master with lines like, “A hat’s not a hat ’til it’s tilted,” perhaps emphasizing that a vaulted confidence can take you to the next level, a fact not lost on anyone paying attention to the Rat Pack.

When you’re looking to have a few laughs for a couple hours, Robin and the 7 Hoods and its cast, all very much at the top of their game, is just what the doctor ordered.  Grab a hat, a beverage, some snacks, and let yourself be entertained, Rat Pack style.