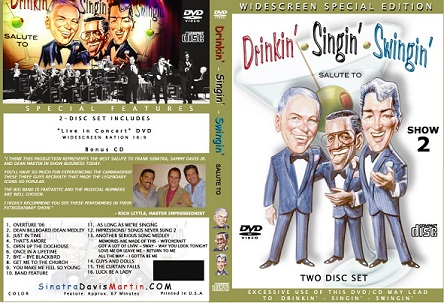 When imagining the Rat Pack, what images come to mind? Chances are that in between all the entertaining their incredible talent let them do, you’re picturing alcohol, cigarettes, partying and chasing skirts. But do we really know the difference between what’s truth and what’s myth.

There’s no question Rat Pack members made good use of keeping themselves current by utilizing the power of the media and their desire to feed the public’s penchant for discovering something shocking. Dean Martin always seemed to have his favorite drink, even though his son has written stating that it was usually apple juice and that, although people expect to see a martini glass during my performances, he didn’t really like martinis. He was hardly a partier either; friends and even family stated that he was so uncomfortable around others they didn’t really know him.

Also, Sammy Davis Jr.’s quotation, “If you want to get known as a singer you hire five sexy chicks and let them fight over you onstage and for the cameras. That’s publicity man,” showing that he knew the power the press had sharing things that aren’t necessarily true, but are items the public want to see and read.

In a 2001 interview for Time magazine, Joey Bishop told them, "Everything you're hearing now is hearsay… Let me give you an example. Are we remembered as being drunks and chasing broads? I never saw Frank, Dean, Sammy or Peter drunk during performances. That was only a gag! And do you believe these guys had to chase broads? They had to chase 'em away!"

In the same interview, Bishop goes on to retell how Sinatra dealt with a female fan, who was threatening to kill herself in the middle of the night if she didn’t get to meet Frank, with kindness and consideration.

During my shows I deliver a performance through the respect I have for these men, hoping to project to the crowd that I am up here because of my love for the songs and how these legendary artists delivered them. I have a public show coming up November 23rd, 2013 at the Starbright Theatre in Summerlin NV.