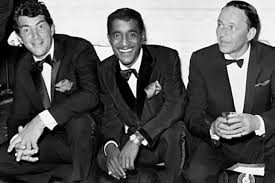 We all have stresses in our life and, idyllic as it may sometimes look, the life of a celebrity is anything but immune to these perils. A Rat Pack lifestyle may be living the dream, but to reach the very top, as Frank, Dean, and Sammy all did, you’ve got to work harder and smarter than everyone else gunning for the accolades. So, it’s no surprise that each of these three legends suffered with something that would warrant a trip to the psychiatrist’s office.

Frank Sinatra had highs so extraordinary most can only imagine their magnitude, but he also sunk to unimaginable lows. I’m uncertain if he was ever formally diagnosed, but I’ve read he was manic-depressive, even attempting suicide as many as three times. Many famous people had bipolar disorder, including Vincent Van Gogh, Carrie Fisher, Jackson Pollock, and Marilyn Monroe, so it would seem as though there’s an inherent brilliance with those afflicted.

Preferring Los Angeles to New York, where, because of the threat of earthquakes, buildings tended to be lower, Dean Martin’s claustrophobia made certain he would take the stairs instead of having the door shut him inside an elevator. That being said, it’s been reported that he got over his fear in the ‘70s by using a psychological technique known today as flooding – he locked himself in an elevator and forced himself to ride it until he was no longer afraid. Clearly he was a very smart man.

We read about it often with celebrities, especially as their stardom peaks, stars at the top of the world only to end up in rehab, or worse. The pressures of performing are great, so it’s easy to turn to something to take that edge off, believing you have control and that appears to be what happened with Sammy Davis, Jr. Often called America’s first black superstar, it’s easy to see he would have had a huge amount of weight on his shoulders and that had to have played a part in his addiction to drugs and alcohol that plagued him in the ‘70s.

Many think the grass is always greener, but I’ve learned enough to know you can’t judge before you’ve walked a mile in someone’s shoes. Illness can affect anyone, it’s how they deal with it that defines them and these superstars are the very definition of what it means to be courageous.