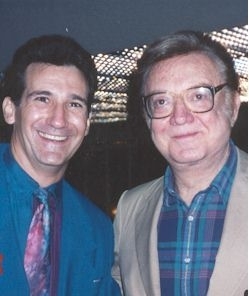 Rick Michel has performed for countless celebrities: Bob Hope, Jerry Lewis, Bill Cosby, Frank Sinatra just to name a few. One night, Michel was performing at the Friars Club in Los Angeles. He was at what would become the first annual showcase for the Society of Singers. In the audience, Michel noticed, was the infamous Steve Allen (the talented composer, writer, and original host of The Tonight Show). Michel, of course, wanted a picture after the show.

The two talked about the performance and seemed to get along great. Allen then asked Michel to stop by his show with Louis Nye, Bill Dana and Buddy Greco later that week at the Sahara Hotel and Casino in Las Vegas. Michel snagged tickets and sat in the last row of 750 seat theatre. Allen had recreated the set of The Tonight Show and Michel remembers it being a hilarious evening.

“I was sitting with my musical director. We laughed so hard from the minute we sat down,” Michel said.

Then, out of nowhere, Allen gets up and announces that he has a new, talented friend in the audience; Allen introduces Michel and brings him up on-stage!

“It was totally unexpected,” RM remembers. “I walked up the steps and Steve handed me the microphone and said, ‘Go ahead, do your thing.’”

Michel proceeded to tell some jokes and the audience responds well, so the performer told the band to start up the song “Fly Me to the Moon.” Michel sang Frank Sinatra’s hit to the crowd and everyone went wild. Afterwards, Michel sits on the couch of the set with Allen, just like an episode of The Tonight Show, and later took a bow with Allen and the other performers that evening.

Later that night, Michel approached Allen and said, “Steve, I just came here to see your show and get you to sign this photo of us.” The two talked about the evening’s events, and then Allen pulled out a pen. He signed the picture, “To Rick, from a fan Steve Allen.”

It was a momentous night for everyone.