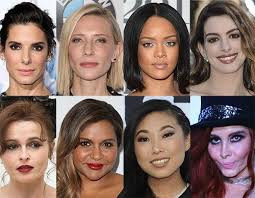 Ocean’s Eight is set to begin production in October in New York and while I love the concept, the movie’s success will evolve around the choice of strong, confident lead characters, just as with the original and even the 2001 remake.  The female costars in the first film exuded strength - Angie Dickinson and Shirley MacLaine were Rat Pack members, which leads into the other thing needed for success: chemistry.

So far, Sandra Bullock, Anne Hathaway, Helena Bonham Carter, Mindy Kaling, Cate Blanchett, Rihanna, and rapper Awkwafina have been named.  I’m uncertain as to why the number has been reduced to eight - perhaps it’s a budgetary thing?

The choices seem pretty solid on paper; Bullock, Carter, Hathaway, and Blanchett have all demonstrated their ability to portray strong, solid characters on screen and will undoubtedly come through with the necessary swagger for this film.  Even the somewhat unknown and       diminutive Awkwafina shines large in her music videos.

Surprisingly, I think the biggest reservations may be reserved for Rhianna.  She really hasn’t come off as possessing the requisite confidence in the past, but maybe she’ll step up for this role.  Earlier this year Chris Martin of the band Coldplay called Rihanna the Frank Sinatra of her generation.  Hmm, perhaps not.

I hope the movie is done properly, as it’s an opportunity to feature some strong female role models for society, which is never a bad thing.  At the very least, it will be an entertaining escape and a chance to witness another tribute to the greatness that was the Rat Pack.