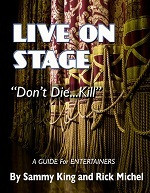 Many performers have dedicated their lives solely to live entertainment. Musicians, actors, comedians, and singers spend their time, day in and day out, honing and improving their craft. Rick Michel – impressionist, comedian, singer, and performance artist – has not only defined his skills on stage, but also co-authored a book about it. Live On Stage: Don’t Die…Kill, written by Michel and performance pal, Sammy King, is about how to secure one’s talents in front of live audiences. Both authors assure readers that Live On Stage isn’t a “How To” guide, but rather a collection of tricks, tidbits, and anecdotes from two well-rounded actors.

Live On Stage is broken up into chapters like “Timing” and “Energy.” Both Michel and King describe what they’ve learned over the years, and what information will be most helpful for everyone from the budding performer to the old pro. Perhaps the most refreshing aspect of Live On Stage is the short tales from the road, so to speak. Throughout the book, Michel and King offer true stories from their experiences as a means of solidifying their advice.

For example, Michel details a particular performance where he did multiple costume changes in a very short period of time. He was so rushed for time that he forgot who he was supposed to impersonate. “I ended up putting Sylvester Stallone’s (Rocky) workout pants and Rodney Dangerfield’s jacket and tie on at the same time,” Michel writes in Chapter One, entitled “Character.” “Needless to say…I was supposed to be doing Ronald Reagan.”

From beginning to end, Live On Stage is full of personal tips that performers won’t find elsewhere. Readers can expect helpful pointers, great stories, quotes from well-known figures and performers, and a unique sense of humor.