Life in a Dressing Room 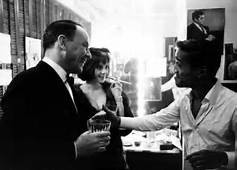 Now that 2017 is in the rear-view mirror, it’s fun to reflect a little upon a very busy and rewarding twelve months.  My tours for Sinatra Forever, Drinkin’ - Singin’ - Swingin’, Frank… A Musical Journey, The Rick Michel Variety Show, and my master class, Live on Stage, Don’t Die… Kill! took me to some very interesting parts of the globe, allowing me to meet some spectacular people.  Life in a dressing room isn’t for everybody; there are times when it can be stressful, but I wouldn’t be doing it if I didn’t enjoy it.

Besides getting to stand in front of a cheering audience (if you’re doing it right!), putting dressing room requests in your show rider can be entertaining.  While mine are definitely tame, there are some stars that have famously gone a little overboard.  Rocker Iggy Pop wanted to be greeted by seven dwarves and have pizza to give away to the homeless and the band Van Halen used to ask for a bowl of M&Ms with the brown ones removed.

Alcohol is a popular theme:  Rapper Eminem would ask for Bacardi and Hennessy cognac; James Brown wanted champagne; and Amy Winehouse demanded Absolut Vodka and (I knew there was a reason I liked her) Jack Daniel’s Whiskey.  Interestingly, The Beetles and Elvis both wanted soft drinks.

I also found a list of requirements from Frank Sinatra.  I’m not going to reprint everything, but it included an assortment of sandwiches, jumbo shrimp, a platter of Nova Scotia salmon, cherry Lifesavers, Luden’s cough drops, and miniature Tootsie Rolls.

Last year brought me to a number of American cities, four Canadian provinces, as well as shows in Mexico, Brazil, and Chile.  I’m happy to report that I’m returning to Brazil in March and I can’t wait to share with you all the other journeys 2018 has in store!