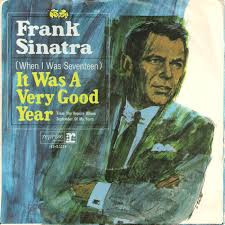 It may be cold and gloomy weather in January, but that can be the perfect time to warm up with some lovely music.  Frank Sinatra and Dean Martin enjoyed their share of success during this wintery month, in fact, some may argue that it’s the best time to sell a romantic song, giving lovers an excuse to cuddle up by a fire.  Who am I to argue with that logic?

For Dean Martin, January was a particularly good month, especially in the ‘60s, hitting the Billboard music charts with three tunes.  1965’s You’ll Always be the One I Love was a perfect snuggle song for couples, not too sad and not too happy either.  I can see this as a perfect wedding reception tune.

You’re Nobody till Somebody Loves You was a monster hit later that same January.  There’s more than a few people in love that had this as “their song” and it’s no wonder with the purity and honesty of the lyrics, plus it’s a pretty spectacular number to hit the dance floor with.

January of 1967 broke tradition for the pretty love song as Martin charted with a fun little ditty called, (Open up the Door) Let the Good Times In.  This song does exactly that and even leads off with a winter reference, “I woke up this morning, toes out of my shoes, cold north winds are howling, bringin’ me the blues.”

For Frank, his first January hit was Pocketful of Miracles in 1962.  One verse goes, “I hear sleigh bells ringing, smack, in the middle of May. I go around like there's snow around. I feel so good; it's Christmas ev'ry day,” fully embracing wintry weather!  This is a wonderfully positive number.

1966 presented a time for Sinatra to become reflective with one of his biggest hits, It Was a Very Good Year.  The song is perfect to play while hiding from that cold north wind Dean Martin spoke about.  Of course, it would have been a hit any month of any year.

When my January ends, I’ll be warming up in Florida with a trio of performances.  Stay toasty and have a very Happy New Year!