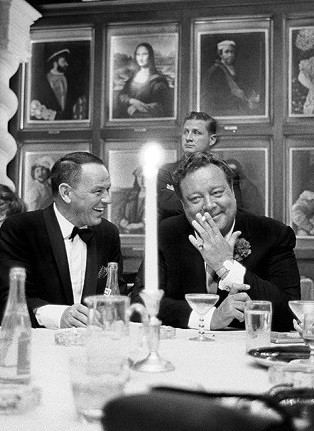 If I told you that one of these two men still held the record for the album longest in the Billboard Top Ten charts, you’d likely think it was Ol’ Blue Eyes, but that’s not the case.  Gleason’s Music For Lovers Only was there for 153 weeks.  His first ten albums each sold more than one million copies.  He couldn’t read or write music, but comprised the theme to The Honeymooners and The Jackie Gleason Show.

In movies, he showed range in his acting genres.  I remember being wonderfully impressed by his performance in 1962’s Gigot (Directed by Gene Kelly), which was a story he came up with.  He received an Academy Award nomination for The Hustler in 1961.  As is often the case with actors known for their comedic roles, I believe his skills were under-rated.

Frank had his bouts with depression and Gleason had a fear of flying, which stemmed from once being involved in an emergency airplane landing in Tulsa and having to borrow $200 from a stranger to take the train home to New York.

Sinatra was famous for his love of Jack Daniels and it was Jackie that was responsible for turning The Voice onto the whiskey when he suggested it as a “serious” drink in a New York City bar during the 1940s.

Of course Gleason’s Ralph Kramden character was iconic and he’ll always be remembered for The Honeymooners.  Despite all the gruffness, a look at the underlying message of the show, his music, and perhaps his life in general, reveals that it seemed to be dominated by love.  Perhaps somewhere he and Frank are celebrating their 100th birthdays and singing an adlibbed version of Fly Me to the Moon, Alice, to the moon.