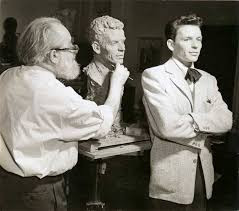 I like to sculpt.  It’s probably not going to be what I’m remembered for, but I still enjoy and appreciate the talent involved with creating something as lasting as a sculpture of another living person.  One of the most famous American sculptors was Jo Davidson who would spend some time with a subject, then form an intense, realistic bust of that individual.  Davidson was commissioned to sculpt many important subjects; Franklin Roosevelt, John D. Rockefeller, James Joyce, Helen Keller, Charlie Chaplin, and Albert Einstein are just a few of the names.  Another is Frank Sinatra.

Davidson was born in 1883 and died in 1952.  In 1946, the now-gray, bushy-bearded artist made a bust of a young Sinatra, debonair and poised, but Davidson did what made him famous, captured The Voice’s fire and life in clay.  Davidson, very famous at this point in his career, still made his work about the subject; he didn’t change the design to make the finished product about himself.

Apparently, there was the one life-sized bust of Ol’ Blue Eyes and 25 twelve-inch miniatures made that, judging from the pedigrees of those that have come to auction, were given out as gifts by Frank to people in his life he appreciated: one went to the female president of his fan club; another to a long-time maid.

Jo Davidson was a very talented artist who made a career for himself being able to do something he enjoyed and meet hugely interesting people at the same time.  Portrait sculptures should be an accurate representation of the subject first, and an interesting-yet-unique piece of art second.  Davidson was able to accomplish both of these goals seemingly with ease.  It’s like listening to Frank’s voice - it seems effortless, but you know a lot of work and dedication went into making it look and sound that way.  That’s how you can spot a true artist.